WHY IS MY POTATO PANCAKES WITHOUT FLOUR?

Many people add flour to all potato pancakes. I don’t add it not because of the diet. This makes them a rubbery. Potato already has enough starch and we add an egg to keep it in form. Surely, just gently squeeze the potato juice. So don’t worry. You don’t need any flour in the recipe.

WHAT ARE THE POTATO PANCAKES FOR THIS RECIPE?

They will be bright! Don’t darken! The onions will prevent the potatoes from darkening. Delicate, crispy on the outside and soft inside. And you can cook them in any thickness, the main thing is just to make them.

WHAT CAN BE POTATO PANCAKE BE SERVED WITH (in addition bacon and egg)?

You can serve pancakes without anything. But usually they are served with sour cream or apple sauce. With mushroom sauce, cream cheese or red fish caviar for the holiday. Gluten-free pancakes ready to serve soft boiled egg or some scrambled eggs with vegetables, prawns or smoked salmon.

Potato pancakes without flour, (also called gluten free latkes) are my favorite dish from childhood. Grandmother often loved to cook them. Potato pancakes are a popular dish in European cuisine. They have different names in different countries. In my country – Ukraine, they are called deruny. In Belarusian cuisine they are draniki, in Polish – placki ziemniaczane. In Israel – latkes. There are also wonderful German potato pancakes – Kartoffelpuffer. Most commonly they’re served with apple sauce.  So, potato pancakes are found almost everywhere, from Latin America to Northern Europe.

My recipe uses metallic salad molds, so the potato pancakes without flour are round in shape and it takes longer to fry them. You can make classic thin pancakes and allow 2-3 pieces per serving.

Easy Potato pancakes make a perfect breakfast or brunch. This is a great vegetable dish. If you don’t add bacon it will be Vegan potato pancakes.

So, How to Make Potato Pancakes?

Peel and wash the potatoes. Don’t put the potatoes in water for a long time as we don’t want to wash away valuable starch!

Be sure to grate the onions on the finest grater first. Grate the potatoes on the medium grater and mix immediately with the onions. The onions will prevent the potatoes from darkening. Add salt and mix. Drain the extra juice, and squeeze it a little. Break the egg and mix it in too.

Heat the vegetable oil in a frying pan.

To make the pancakes round and thick, fry them in bottomless metal molds. Or you can just spread them out with a tablespoon, then they will be crispier and thinner.

Place 2-2.5 tbsp of potato mixture in the mold, a diameter of about 7-8 cm, flatten the surface with a spoon.

Fry on a low heat on both sides. Cover with a lid at the end. Remember that the potatoes are raw and should have time to fry. If you are not sure about whether they are ready, place in an oven heated to 180°C (360°F) for 7-10 minutes. Place the cooked pancakes on a paper towel.

In a dry pan, fry strips of bacon on both sides until golden. Place on a paper towel so that the excess fat is absorbed and the bacon remains crispy.

Place the eggs on the pancakes together with the bacon, then add the tomatoes and garnish with parsley leaves.

By the way, I have a wonderful recipe Hollandaise sauce. Which will perfectly complement our potato pancakes.

And for dessert, you can make these wonderful Flour Free, Oil Free, Gluten Free Chocolate Chunk and Cranberry Cookies by Gabriela at conflictedvegan.com

What to Cook This Week?

Get recipes to your inbox.

Processing…
Success!
Whoops! There was an error and we couldn't process your subscription. Please reload the page and try again.

Find a recipe or ingredient 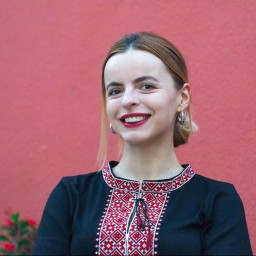 I'm Alena. I love to cook, photograph and eat. And then I write about it.
In this space I'm sharing gourmet, approachable and exciting recipes for every day.